First off, I tell you about the tri-speed turntable that powers this podcast, and then Ole checks in with the now-classic "Yingle Yingle Yumping Beans." After a word from the company that brings you the very best chocolate, we check out a couple of Beatles covers from Bing Crosby ("Hey Jude") and Benny Goodman ("Octopus's Garden").

While we're on the subject (and after a commercial message a la National Lampoon Radio Hour), a brief introduction to Emitt Rhodes, who was marketed as a McCartney sound-alike but was quite an artist in his own right. The link takes you to a nifty interview that I discovered after the show was put to bed.

I had to hear the Ballad of Serenity again before bringing in Marc Gunn's version of "Hero of Canton," and then it was time for Rockosaurus Rex to ring in the new year a couple of days early.

UPDATE: Sometimes the obvious escapes me, but this is ridiculous: Download here or click the player up there on the right.

Playing catch with my daughter 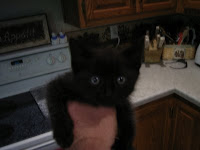 She came into our lives about 18 months ago, on Friday the 13th of July, 2007. As I turned onto the U.S. 41 on-ramp, a little black kitten darted across the road in front of me and disappeared into the brush on the side of the ramp.

I pulled over, thinking that she probably would just run away in the tall grass - but instead she popped back onto the shoulder and started croaking, like E.T., "Home! Home! Home!"

So I took her home. The vet said she was 5 weeks old and healthy.

I called her E.T. for a few days, until her dry throat healed and she started mewing like a normal kitten. Red named her Blackberry, and it fit.

The thing that became clear fairly quickly is that this cat is smarter than the others. All of our little beasts (yes, all seven) have their front claws removed - it's a defense measure to save our property. (We don't let them outside where they can become predators and prey, either.) The time for declawing is usually ripe when they start climbing the door jams and the patio door screen.

Well, after being stymied by the loss of her front climbing implements, this kitten learned to brace her back against the open sliding door and use her back claws to climb the screen - working her way down the same way. Smart kitten. 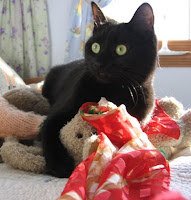 She has invented a game on the stairs. She will drop a little green Nerf ball down the stairs and try to catch it on the way down. It works better if I help. From the bottom, I'll toss it over her head so it bounces off a top stair, and she'll chase it down.

The other day, she stayed on a middle stair and pounced for the ball as it bounced past. When she caught it, she'd play with it for a couple of moments, and then bat it over the side so it bounced back down to me. Sometimes she'd whap it as it went by to give it extra momentum and try to get it past me.

We played the game for 10 minutes. I'd try to stop when she was chewing on the ball and say, "OK, I have to get ready for work," but after I took a few steps away I'd hear the ball bounce down the last few stairs. She wasn't ready to stop playing.

Why didn't I just keep walking? I don't have kids of my own, so the animals are the closest thing I'll have to children. About halfway through this episode, it struck me that this sweet joy I was feeling must be something like fathers feel when they're playing catch with their children. I wasn't ready to stop playing, either.
Posted by Warren Bluhm at 11:22 AM 1 comments

Email ThisBlogThis!Share to TwitterShare to FacebookShare to Pinterest
Labels: the cats 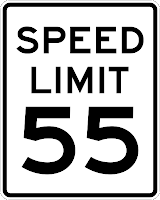 A special hat tip to Wally Conger, who influenced this show in ways you'll hear about. Wow, it's good to be back — I hope you agree.

Coming your way: Vintage ads for Camel and Budweiser, with The Crew-Cuts stepping in for the latter. Also ...

+ Sweet Dawn My True Love, a B-side from Crispian St. Peters
+ You Can Have Him, a lost treasure by Dionne Warwick
+ Railway Station, from Oshkosh's own Bill Waters Band
+ Sixteen Tons by Eric Burdon, the best thing about Joe Versus the Volcano

... and a lot of jabbering from yours truly. Download here or by clicking the Pod icon.

UPDATE 12-17-08: Yumpin Yiminy, I went almost a week forgetting the "55" illustration I tracked down for this episode. Whatever. It's there now.
Posted by Warren Bluhm at 8:50 PM 0 comments

Where I hope to be heading

I think back in September of '06 I had a different feeling when I sat down to do Uncle Warren's Attic #2. More relaxed, having more fun — it wasn't "I have to do a show." I think that's where I want to get back to.

It's nice of you to visit, even though I haven't been here for a while. So here's a secret you can tell your friends and family: Uncle Warren's Attic #55 will arrive soon.

I've spent the last couple of days listening to UWA #2-5, and I think going "back to the basics" may make the show fun to make again. I found some fascinating stuff poking around in the Attic last night, and I think you'll get a kick out of 'em.

So consider this viral marketing - if you know anyone who has enjoyed the show in the past or might like what I did back in those early shows, pass the word. Thanks!
Posted by Warren Bluhm at 7:05 AM 1 comments