I have at least three personas that I present to the world. Which one is the real me? Well, all of them, of course.

There is the mild-mannered newspaper editor, just trying to inform the community, touch its heart, and/or occasionally influence a thought or two.

There is the one author, a philosopher and pundit who believes in the power of the individual to change the world. The power of the collective? Not so much. Think Refuse to be Afraid, A Scream of Consciousness.

And there is the other author, a lover and student of pop culture who writes stories about superheroes and spaceships and other fantastic stuff. Think The Imaginary Bomb, Firespiders.

Sometimes there is a little overlap, such as in my book The Imaginary Revolution, which posits a real revolt that overturns a tyrannical government and then refrains from the imaginary-revolutionary tradition of replacing it with another government, which seemingly inevitably begins to repeat the sins of the old one. “Tyrannical government” – I repeat myself.

Weaving through all of these personalities is the lover of my life’s partner, known as Red on these pages, and Willow The Best Dog There Is and the cats, and the sometimes guitar strummer and writer of songs.

Each of us, I suspect, has multiple personalities at odds with each other, competing for dominance and working ever onward toward integration.
Posted by Warren Bluhm at 6:44 AM 0 comments

Sweeping out the Attic 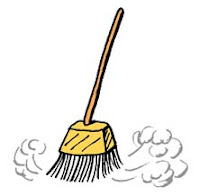 It's time for one of my interminable efforts to find focus, as the 81st edition of Uncle Warren's Attic hangs tantalizingly in the future of the half-dozen people who may still care.

Slowly this site has evolved into a place where you may find my musings about pop culture, and an occasional podcast, while WarrenBluhm.com has become a repository for everything else.