One of the folks whose voice is preserved in my collection of vintage 78 rpm platters has passed away; Tony Martin lived to age 98.

"A peer of Bing Crosby and Frank Sinatra, Mr. Martin sang full voice in a warm baritone that carried special appeal for his female audience. Among his hit recordings were 'I Get Ideas,' 'To Each His Own,' 'Begin the Beguine' and 'There's No Tomorrow,'" says this obituary.

I thought he had appeared in a number of Uncle Warren's Attic shows, but a quick search finds only his appearance way back in #4, when I played "I Don't Care If The Sun Don't Shine" for you. As I unpack the shtuff and start podcasting again, I'll have to rectify that situation.
Posted by Warren Bluhm at 7:32 AM 0 comments 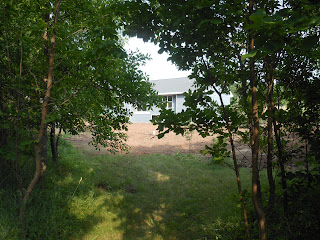 Red and I are days away from fulfilling our dream of moving into our new home not far from the waters of Green Bay in beautiful Door County, Wisconsin. We have owned this land for about seven years looking forward to this day.

There has been precious little time for reflection of late, but I have had moments here and there to think about the type of art I'm compelled to make. We all make art, you know, whether it's perfectly executed door trim or an imposing mound septic system or something as mundane as a Mona Lisa. 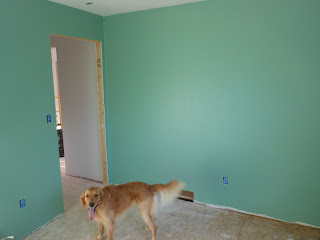 This is the room that will become my new Attic, and I hope to be performing weekly again by the end of September. Since we started preparing to put our former home on the market almost 25 months ago, I have not had a permanent place to rest my creative equipment or my vast stash of shtuff. It's hard to say how this has affected the process, but starting this fall we'll see the effect of having a home again.

With all of my electronics save the trusty iMac packed in boxes for the summer, along with my books, records, tapes, CDs, DVDs and almost everything else I own, I have been using these precious moments to dive back into the world of imaginary physics and finally put flesh on the bones of the story that is The Imaginary Revolution, and I thank you for your input and your readership as the story of Raymond Douglas Kaliber squeezes itself out of my heart and soul and onto the, um, printed page. I have posted the book cover with a notation "Available by Christmas 2012," and you've seen promises like that from me before. My goal is that one effect of having a home will be that I keep promises better.

To you few who have been with me since I started podcasting The Imaginary Bomb in 2006, through the premiere of Uncle Warren's Attic that September, and through its various stops and starts, my heartfelt thanks. A new phase is about to begin – perhaps this is the home stretch (pun intended) or simply the next chapter, but I'm glad to have you along for the ride.

My trilogy about life

I still think about kyfho from time to time, and he came up in memory the other day. I remembered a conversation I'd had about kyfho's insistence that you need to define your philosophy of life or otherwise you just drift. Another friend I deeply respect called that statement a bunch of hooey, or something like that.

I got to thinking that kyfho may have influenced my last three major writing projects – the books Refuse to be Afraid and A Scream of Consciousness, and the current effort ImagRev: The Imaginary Revolution, a novel that I am writing as a daily blog that will become a book at some point.

What is this little trilogy if not an attempt to define a philosophy of life? Refuse to let your fears control you. As much as possible, tend to the needs of the present moment, because neither the past nor the future are accessible just now. And, in Ray Kaliber's Tenets of Common Wealth, Love your neighbor as yourself; interact with love, not force or violence; and give more than you receive.

Enough navel-gazing, my other friend has cried a time or two. He misses what I had to say when I was railing against the abuses against individual sovereignty that occur daily in what is proclaimed to be a free country. What I'd decided was that freedom is an internal thing, and that its embers are fanned into a flame not by focusing on politics and government but on personal actions. Still, the forces of government do spend a lot of time trying to restrict and even outlaw personal autonomy.

I'd like to think The Imaginary Revolution would please both friends. It has a healthy dose of philosophy, being about a society based on the Zero Aggression Principle and all. But science fiction, speculative fiction, has never really been about predicting the future as much as it is about reflecting the present in an alien environment. You may find that life on Sirius 4 has a familiar feeling.

Please consider this an invitation to explore these philosophical musings and dramatizations and let me know what you think – especially if you find it a bunch of hooey. Being challenged is how we grow.
Posted by Warren Bluhm at 7:39 AM 0 comments

Email ThisBlogThis!Share to TwitterShare to FacebookShare to Pinterest
Labels: Imaginary Revolution, kyfho, Refuse to be afraid, Scream of Consciousness

State of the Attic midsummer report

We are on track to complete the new house, with its new Uncle Warren's Attic, by early August. The outlook from our temporary quarters is remarkable! I do miss my stash and have not had an opportunity to visit it in its storage unit.

It is now two years since we started packing our belongings away to put the old house up for sale, and 10 months since we actually moved out. Ground was broken May 22 on the new place, and it's been quite an adventure watching it emerge from our dreams after all these years.

The plan is still to launch the "fall season" of Uncle Warren's Attic, the podcast, in the area of late September, or about the time you are getting accustomed to the new season of network television madness. I just gave another listen to the preliminary work I've done on UWA #78 and #79, and I'm kind of excited to reassemble the studio and get going again. But all things in their time.

I have not been standing still, of course, as you know if you've been regularly visiting the new blog, ImagRev: The Imaginary Revolution. There, the long-awaited followup to The Imaginary Bomb is unfolding in the form of Ray Kaliber's memoirs. Speaking of "years in the making," I have been meaning to tell the story of Sirius 4 independence since I wrote the first novel in 1988, since I podcast it in 2006, and since I published it in 2008.

It took the death of Ray Bradbury to at long last release the muse and get The Imaginary Revolution started. You may recall a false start or two, and you may even detect the rewritten sections from those early efforts, with some essential changes. I have been known to drop the creative ball over the years, but as sure as Buffalo Springsteen has reservations about being called "Buffy," I think this time the story will finally be told in its entirety.

First Ray has to finish his memoirs, and then the blog needs to be edited into more or less chronological order. He's tending to jump around in the time continuum as he decides what he wants to write about day-to-day. There's a lot of key moments this week as Ray completes his first month of entries.

Sometime this fall or winter – depending on when we conclude he's finished with the story – The Imaginary Revolution will appear in book/ebook form. Sooner than that, I'm planning a podcast version. Stay tuned.

I appreciate everyone who's been around during 12 episodes of The Imaginary Bomb, 77 episodes of Uncle Warren's Attic, 150 episodes of Ikthuscast, a small pile of books, a couple-three blog identities, and various other odds and ends. If you're liking what you see on ImagRev or hear from the Attic, I'd sure appreciate your sharing it with your friends. My main motivation is to entertain and/or express some big ideas, and I'd do it for a handful of friends or even just one, but the more the merrier.
Posted by Warren Bluhm at 4:48 PM 0 comments