You may have noticed there's now a handy-dandy button linking you to ImagRev: The Imaginary Revolution, the daily memoirs of Ray Kaliber, who is considered the founder of the stateless Commonwealth of Sirius 4. This would be a good week to drop in, because he's talking about the development of his philosophy of nonviolent civil disobedience and the early moments of his courtship with the love of his life, Buffalo Springsteen.

It's still early enough that it would take just a few minutes to catch up by wandering back to Entry 1. You also have an opportunity to look like a trend-setter by being one of the first to get hooked on this interplanetary tale of freedom, rebellion and romance that no doubt will have all of cyberspace talking one of these days soon. The blog is updated at 5 a.m. every day, so go ahead. Make it a habit. Click the button! Start the conversation! Tweet and retweet! Get the buzz buzzing about ImagRev: The Imaginary Revolution.

I've also replaced the text descriptions of my books with buttons featuring the cover art. Click on whichever catches your fancy to learn more about what's behind the covers.

An update: Our new home has a roof over it, bathing stations have been installed in the bathrooms, and the electrician has wired the place. Someday soon they'll hook the place up to the electricity grid and sink a well. We're hoping to move in by early August and resume podcasting in September.

While the aural stash is in storage, I'm pleased to be sharing the long-awaited story of Sirius 4, which has been waiting to see the light for a long time.

It's an exciting time! Use the buttons!

A tribute to Robin Gibb 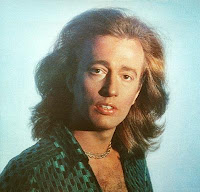 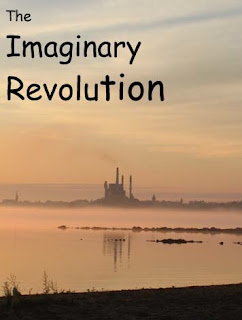 "Zest. Gusto. How rarely one hears these words used. How rarely do we see people living, or for that matter, creating by them. Yet if I were asked to name the most important items in a writer's make-up, the things that shape his material and rush him along the road to where he wants to go, I could only warn him to look to his zest, see to his gusto."

That's the start of Ray Bradbury's essay "The Joy of Writing," in which the master reveals how he did it. Actually, and in words more poetic than this, he distills writing down to this: If you love to write, and you want to be a good writer, then write. Write every day, and keep writing until you get good at it.

I've been tinkering around the edges of a book called The Imaginary Revolution for, oh, at least four years, when I assigned the tale to the works of my erstwhile alter ego, B.W. Richardson. But truth to tell the story has been in my mind a lot longer than that. For it to still be in my mind and not out in the world on the day Ray Bradbury died – Ray, to whom my lead character's name is an obvious homage – is not just embarrassing, it's shameful. Because this is the kind of story I have wanted to tell all my life.

"Live Forever!" said Mr. Electrico to young Ray Bradbury, and the books are how he will fulfill that directive. Another way is through the thousands of writers who became writers inspired by the zest and gusto in his work.

I always thought I would write an essay when Ray Bradbury's mortal vessel finally ran out of steam, but a better idea came to me. For several weeks I considered telling the story of the Imaginary Revolution through the words of Raymond Kaliber himself, and not as a novel but as a series of blog posts. Still, I let the idea just sit there in my mind. Sitting down to write this week, I realized the world does not need another essay about how great and influential a writer Ray Bradbury was. The way to celebrate the life of Ray Bradbury is to write, write every day, and keep writing until I get good at it.

Wednesday, I learned Bradbury was dead.

Thursday, I launched the blog.
Posted by Warren Bluhm at 9:07 AM 0 comments 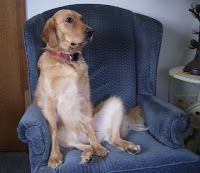 And there, sitting on the chair by the window, pretending to look out at the sun  but in  fact yearning for his attention, was a golden retriever.

Not just any retriever, mind you – this is the small beast that he had declared to the world was The Best Dog There Is, the most loving bit of fur on the face of the planet, looking forlorn and lonely as he poked absentedly at a keyboard and words appeared magically on a glowing screen.

Feed me. Hold me. Love me. Don’t type! she pleaded.

And so he left the screen and complied.
Posted by Warren Bluhm at 7:01 AM 0 comments