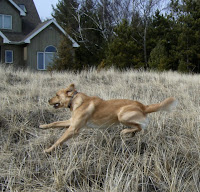 Freedom is a place that seems to be the opposite of fear. And by definition, of course, freedom will mean different things to different people.

Freedom is often described in terms of absence: Freedom is the absence of present tyranny, barriers, threats, debt or other restrictions, or it is moving beyond the past to a promising future.

But freedom is more than a void; it is what fills the void: The actions, the peace of mind, enabled by the removal of those barriers.

Freedom is also, joyfully, an absence of fear — more accurately, of course, a willingness not to allow fear to be yet another barrier.

Make no mistake, fear is real — but you can decide not to be controlled by your fear. You can refuse to be afraid. It’s a little scary — but it’s a sound decision.

I am inspired by the attitude of our golden retriever puppy. When she is unfettered, Willow is a thing of beauty as she runs. She will run as fast and as far and as long as she can, or until I call her name and she comes running back.

Ideally we are limited only by others; ideally the only limit to our freedom is that nothing we do will limit others’ freedom.

“Fear not” and “be free” are nearly the same command. Refuse to be afraid — dare to be free — these are bold decisions.
Posted by Warren Bluhm at 8:09 AM 0 comments

Email ThisBlogThis!Share to TwitterShare to FacebookShare to Pinterest
Labels: freedom, Refuse to be afraid 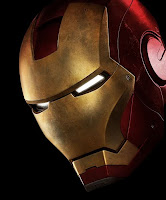 Who's better, um, suited to achieve world peace — the private sector or the U.S. Senate? That's among the questions raised by the amazing new film Iron Man 2, now playing at your friendly neighborhood movie theater.

When we rejoin Tony Stark, last seen admitting that he is the man inside the Iron Man armor, he is fending off an unctuous senator (played with astonishing realism by Gary Shandling) who believes those high-tech secrets would be safest in the hands of the public sector. Stark has the temerity to assert that his property belongs to him, setting up one of the film's central conflicts.

After the first Iron Man unexpectedly was one of the best comic-book movies ever made, I had my expectations lowered sufficiently by several reviews that concluded the first sequel wasn't up to the standards of the 2008 original. By the time Captain America's shield makes an unexpected appearance, I was totally immersed and well on my way to concluding the relatively downer reviews were hooey.

Robert Downey Jr. continues to be a dream bit of casting as Tony Stark. Mickey Rourke is wonderful as the villanous Ivan Vanko (Whiplash), and Sam Rockwell's Justin Hammer is the actor's most entertaining performance since he nearly stole Galaxy Quest as Guy Fleegman. Gwyneth Paltrow is appealing again as Pepper Potts, although she isn't given as much to do as in the first flick.

Scarlet Johansson is marvelous as the mysterious new lady from Legal, and the scene near the climax where we get the full reveal of her capabilities is right up there with Yoda's light-saber battle in the annals of action-flick treasures. Don Cheadle as Rhodey/War Machine is fine, although I still don't know why it was necessary to replace Terrence Howard, who handled the role in the first installment.

After two hours that flew by in a flash, director Jon Favreau (born to direct Iron Man and to play Happy Hogan) has answered my opening question definitively — What has government ever done better than the private sector, after all? — and pretty much cleared the enormously high bar he raised in chapter one.

The main reason Iron Man 2 is not quite the special ride that Iron Man was is simply that it doesn't have the element of surprise: Few people really thought that a film based on one of Marvel Comics' second-tier heroes would be that great. The second film proves it wasn't a fluke.

And the now-routine teaser scene after the closing credits is one of Marvel's best yet. Is it 2011 yet? Please?!
Posted by Warren Bluhm at 10:01 PM 1 comments 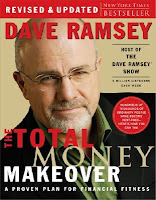 Hi, my name is Warren and I like stuff.

The pursuit of stuff has gotten me in trouble three times in my life. Credit cards maxed out, living paycheck to paycheck, fear that the next time the phone rings it'd be some lower life form wondering why the check I promised to mail this morning hadn't arrived by afternoon.

Actually, this third time the situation hasn't gotten nearly that bad yet. The first two times were enough to educate me to the warning signs, but not enough to get me to quit pulling out the plastic. Intellectually I knew debt is dumb — the borrower is slave to the lender — but like a drunken congressman, I couldn't stop.

Dave Ramsey has built a small business empire teaching people to stop and start using money properly. The Total Money Makeover is the distillation of his lesson plan. It's as simple as getting out of debt, writing a budget, saving money and not buying anything you don't have the cash for — but in a world built on instant gratification, simple can be revolutionary.

The key is behavior modification. As Ramsey states, being a recovering stuff addict himself, figuring out how to get out of debt is mathematics, but if everyone who can do the math could do it, we wouldn't be a nation of debtors. His "Total Money Makeover" is training yourself to change your behavior in a series of seven "baby steps." Completing each step gives you a little taste of victory, which builds encouragement and momentum.

Armed with Ramsey's book and his daily podcast (which is one hour of his three-hour syndicated radio show), for the first time in my life I have a small emergency savings fund, I have cut all of my credit cards into pieces and started paying them off — paid the first one down to zero at the end of March, and the second monthly payment should disappear this month. I can see a future where I am earning interest, not paying it, and that makes me eager. And if I can do it — a guy once hopelessly addicted to pulling out the card and buying stuff without thinking — you can manage it, too.

This isn't just a book, it's a lifestyle change and a path to freedom. Find the podcast, find the book, and start your own journey.
Posted by Warren Bluhm at 5:07 AM 0 comments