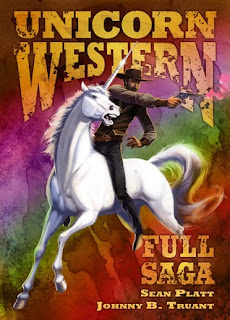 It began as a laugh among friends. It has evolved into a nine-novella epic with the promise of two more epics to come. The story of how Unicorn Western came to be is almost as much fun as the actual story.

Sean Platt and Johnny B. Truant are two-thirds of a podcasting team that meets weekly to talk about writing and self-publishing. One day the other third, David W. Wright, took exception to Platt’s stated desire to write a western someday. Too much trouble, too much research needed to make it authentic – for example, do you know what color was the smoke from those old six-shooters? Hilarity ensued.

The solution to Wright’s objection: Put a unicorn in the story. That way when people question what appears to be an unrealistic detail, you can respond that this isn’t the real Earth: “If we’ve filled the world with unicorns, I’d say we can do anything we want!”

A few short months later, the joke is a series of novellas available as ebooks separately or in ebook and print as Unicorn Western: Full Saga – a sprawling tale of magic and prairie justice that spans decades and pays homage to at least nine films along the way. (Because I need an occasional break from electronic screens, I opted for the 690-page book.) There are plenty of in-jokes and winks that will bring a knowing smile or a laugh-out-loud to people familiar with the films and The Self-Publishing Podcast – my favorites are the prophetic owls – but the story creates a mythology all its own and stands up as a rousing yarn despite its goofy origins.

This is not Atlas Shrugged or even Lord of the Rings – the main thing it has in common with those works of literature is its length – but the payoff is definitely worth the long ride; the authors entertain and make you care along the way. Unicorn Western is the reader’s equivalent of a summer blockbuster movie, well worth the time invested and leaving you with anticipation of the sequel(s).

Posted by Warren Bluhm at 4:00 AM 1 comments