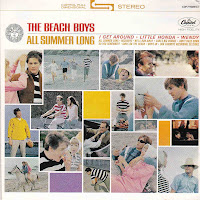 Listening to the "All Summer Long" album - it's simply amazing how much 1964 changed the musical landscape, mainly due to two bands whose names started The Bea ...

I had never heard the whole album all the way through; it wasn't one that was in my collection. I didn't buy albums when I was 11 years old - yumpin yiminy, they cost almost $3 each! - and I had the mistaken impression that the early Beach Boys singles, not the albums, were their important contributions.

To be sure, the singles on this album are the immortal gems - "I Get Around" may be the most perfect single pop music recording of 1964, and yes I do know I'm placing it above all that Beatles stuff, the Four Seasons at their prime and my beloved "(Just Like) Romeo and Juliet" - and "Little Honda," "Wendy" and the title track "All Summer Long" are all here.

But here are 12 little bits of musical magic, assembled at a time when the average record album was an afterthought - the band's hits with a few covers thrown in to fill out the package. "We'll Run Away," "Girls On the Beach," "Drive-In," "Don't Back Down" - whoa. Those may not be staples of Oldies Radio, but they are beautiful little tunes with imaginative chord changes and soaring harmonies that weren't quite like anything else being done at the time.

Maybe it all changed when the Fab Four crossed the Atlantic - or maybe pop music began to change when the Wilson boys and their cousins started exploring the possibilities.

P.S. T-minus 3 days and counting to the relaunch of Uncle Warren's Attic.
Posted by Warren Bluhm at 7:32 AM